The New Jersey appeals court reversed a trial court’s dismissal of a legal malpractice action brought by beneficiaries of an estate against the attorney representing the estate, holding that estate attorneys may owe a duty of care to non-clients when the attorneys know, or should know, that non-clients will rely on the attorneys’ representations. Higgins.. read more →

A Chancery Court judge determined that the administrator of an insolvent estate in New Jersey must first exhaust all efforts to satisfy creditors from probate assets before the attachment of non-probate assets should be considered. Matter of the Estate of Turco, Chancery Div., Probate Part-Essex County (Koprowski, J.S.C., July 22, 2013) Jerry Turco died testate.. read more →

Ownership Of Joint And Payable-On-Death (“POD”) Accounts, Before And After Death: Who Owns What?

THE MULTIPLE-PARTY DEPOSIT ACCOUNT ACT Bank accounts are often established in the name of more than one party. Questions may arise regarding the rights of ownership of these accounts, during the lifetime of the owners or after an owner’s death. In New Jersey, joint accounts (using either an “and” or an “or” designation), and payable-on-death.. read more →

Understanding Federal Estate Taxes, and State Estate and Inheritance Taxes (All Of Which Are Commonly Referred To As “Death Taxes”)

2009 was an exciting year of litigation in the elder and disability law arena, producing a bumper crop of significant decisions from the administrative forum, as well as state and federal courts. In stark contrast with years past, New Jersey lawyers are now in the forefront of the effort to expand legal protections to greater.. read more → 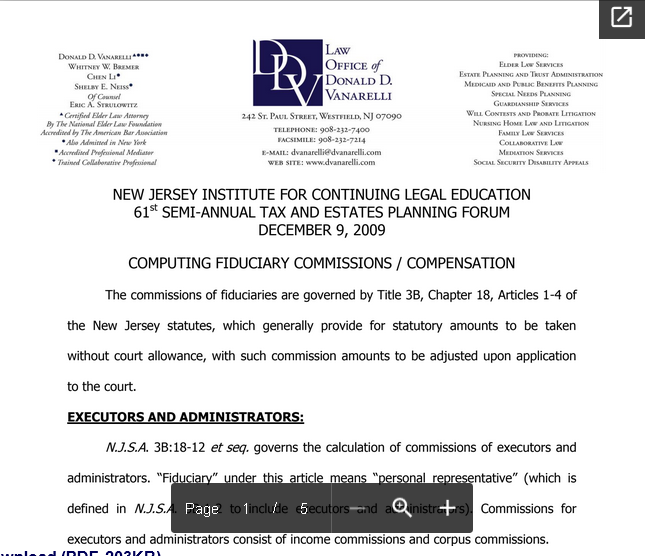 Gov. Jon Corzine recently signed into law new legislation that requires fiduciaries of estates for developmentally disabled individuals to post bonds in Superior Court as a safeguard against theft and other improper conduct. The bill, S-550 , sponsored by Sen. Stephen Sweeney, D-Gloucester, goes into effect in 60 days. S-550 requires that the amount of.. read more →