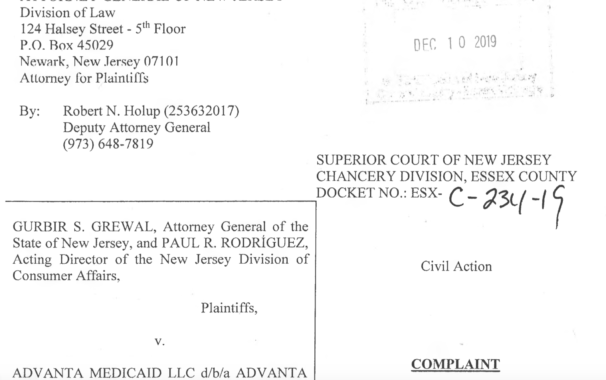 A company that was supposed to help consumers complete Medicaid applications for a fee stole more than $300,000 from clients, according to a lawsuit filed by the New Jersey attorney general and the state Division of Consumer Affairs. The State’s complaint, alleging violations of the Consumer Fraud Act, was filed in New Jersey Superior Court in Essex County.

Advanta Medicaid LLC d/b/a Advanta Medicaid Specialists (“Advanta”), which had offices in Ocean County and Waterbury, Connecticut, allegedly charged dozens of New Jersey consumers fees of between $3,000 and $9,000 to assist them in filing Medicaid applications to establish eligibility for benefits. The company offered a money-back guarantee for those not approved for Medicaid “but failed to deliver the services promised or provide full refunds as guaranteed,” the state said.

Ultimately, Advanta ceased operations abruptly, leaving consumers who had already paid for the company’s services with nowhere to turn.

The lawsuit also names as defendants two men involved with the company, Nissim “Sam” Aryeh and Chaim E. Feller, both of Ocean County.  According to the complaint, Aryeh and Feller transferred company funds into their personal accounts and used those company funds to cover expenses at an Atlantic City casino — Harrah’s Resort — costs at high-end restaurants, clothing stores, bicycle rentals, car payments, furniture and flooring purchases and payments to local private schools and synagogues, the complaint said.

The Division opened its investigation after receiving dozens of complaints about Advanta. To date, more than 49 consumers or their family members who contracted with Advanta between 2014 and 2018 have reported paying upfront fees but then never receiving the services that Advanta promised or the refund it guaranteed customers who were not approved for Medicaid coverage. The suit said the state expects there are many more victims who have not yet been identified.

The State alleges the defendants violated the New Jersey Consumer Fraud Act and advertising regulations by engaging in conduct that included:

In addition to seeking restitution for injured consumers, the State’s filing seeks to impose monetary penalties for the defendants’ alleged unfair and deceptive business practices, to terminate Advanta’s business registration, to recover attorneys’ fees and investigative costs, to bar any ongoing or future unfair and deceptive business practices by the defendants, and to restrict Aryeh and Feller’s business activities in the State.

“Families and individuals seeking assistance with Medicaid enrollment are among those who can least afford to lose thousands of dollars to fraud,” New Jersey Attorney General Gurbir Grewal said in a press release. “Today we’re sending a clear message that there will be serious consequences for companies and individuals who prey on New Jersey consumers, and particularly on those who are most vulnerable.”