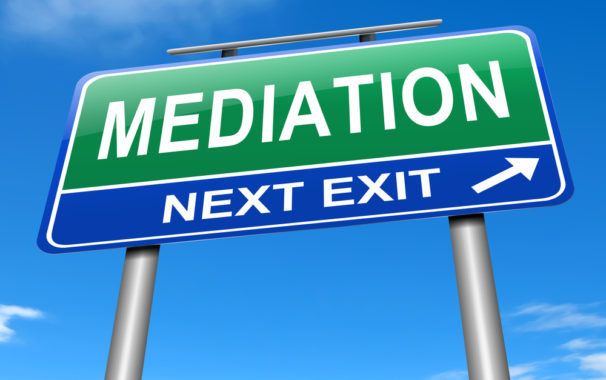 (“The ElderLaw Report: Including Special Needs Planning” is the premier newsletter covering elder law and special needs planning issues. This monthly newsletter keeps legal professionals current with critical developments in elder law and special needs planning, and supplies real-world solutions to the unique legal problems facing senior and disabled clients. The most recent article I prepared for The.. read more → 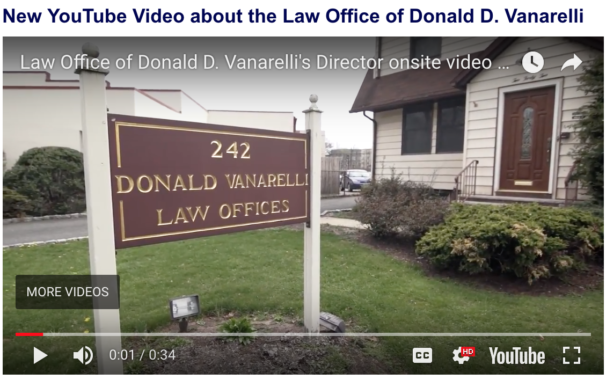 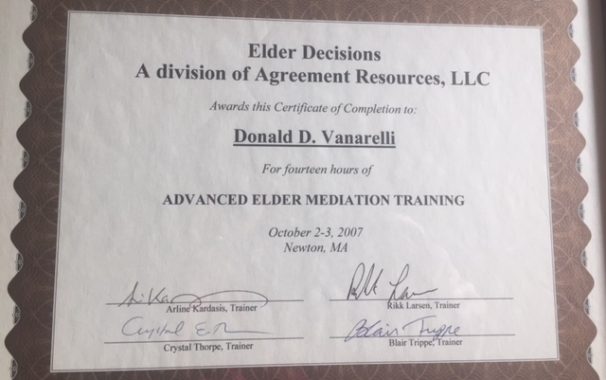 The Law Office of Donald D. Vanarelli provides elder mediation services, a specialized form of mediation to help elders, the disabled and their families resolve conflict. Mr. Vanarelli is co-founder of the Elder Mediation Center of New Jersey, a collaborative venture with other elder law attorneys and geriatric professionals whose mission is to educate professionals and private.. read more →

The Best Way to Talk to Someone with Alzheimer’s

I just read an insightful article in the Washington Post. The article, by Susan Berger, asks the question: “What’s the best way to talk to someone with Alzheimer’s?” It stems from an encounter between Berger and an acquaintance of hers who had just been diagnosed with the disease. The article explores what to do and.. read more →

Following the death of Kenneth Kanter, his son contested the validity of Mr. Kanter’s will and several quitclaim deeds Mr. Kanter had purportedly executed. These documents were drafted and/or prepared by the decedent’s brother, Sidney Kanter, who is a suspended New Jersey attorney. The parties mediated the case and reached a settlement of the matter… read more →

The New Jersey Supreme Court ruled that a settlement that is reached at mediation but not reduced to a written agreement signed by the parties before the mediation ends will not be enforceable. Willingboro Mall v Franklin Ave LLC, Docket No. A-62-11 (N.J., August 15, 2013) Willingboro Mall, LTD (Willingboro), the owner of the Willingboro.. read more →

New Jersey Association of Professional Mediators (NJAPM), a statewide, non-profit professional organization dedicated to fostering excellence in the field of mediation, has launched a reduced-rate mediation clinic for divorcing couples to resolve the issues in their divorce while providing training for new mediators. Eligible couples will have their divorce mediated professionally and confidentially at a.. read more →

A state appeals court ruled that a will contestant waived the mediation privilege, prohibiting disclosure of mediation communications to non-participants, when both he and his opponent authorized the mediator to inform the trial judge of the results of the mediation. Rutigliano v. Rutigliano, Docket No. A-2797-11T1 (App. Div., October 15, 2012) Plaintiff Vincent Rutigliano and.. read more →

In this case, the chancery court held that post-mediation correspondence between the attorneys for the parties allegedly memorializing the terms of a verbal settlement reached in mediation constituted confidential mediation communications, not subject to disclosure. Partners Pharmacy Services v. Halbert, Docket No. C-72-09 (Chan. Div., Union County, April 16, 2012) The parties in this case.. read more →

In Williamson v. Boehringer-Ingelheim Pharmaceuticals (N.J. App. Div., March 12, 2012), the New Jersey appellate court advised mediating parties how to prevent successful post-mediation challenges to settlements reached in mediation. The court’s conclusion: don’t conclude the mediation without having the parties or their counsel draft and sign a document containing the essential terms of the.. read more →

In its January 27, 2012 decision in  CTC Demolition Company, Inc. v. GMH AETC Management/Development LLC, which has been approved for publication, the Appellate Division considered the novel issue of whether a party’s demand for mediation or arbitration triggers the “first to file” rule. Notably, the court had found only one decision in any jurisdiction.. read more →

Model Standards of Practice for Family and Divorce Mediation

Family and divorce mediation is a process in which a mediator, an impartial third party, facilitates the resolution of family disputes by promoting the participants’ voluntary agreement. The Model Standards of Practice for Family and Divorce Mediation are the product of an effort by mediation-interested organizations and individuals to create a unified set of standards.. read more →

(The Fall 2011 issue of Mediation News, the newsletter of the New Jersey Association of Professional Mediators (NJAPM), contains a short article on NJAPM’s newly-formed Estate and Elder Mediation Special Interest Group. The article is reproduced below. If you have an interest in this emerging practice area, please contact me or simply come to a.. read more →

A law firm accused of malpractice for allegedly turning down a settlement offer lost its bid to compel a federal mediator to testify about settlement negotiations between the parties at the mediation. McKissock & Hoffman, P.C. v. Waldron, Civil Action No. 10-7108 (E.D. PA, August 4, 2011) This federal district court case grew out of.. read more →

Oral Settlement Agreements Reached In Mediation Are Valid And Enforceable

An appellate court in New Jersey recently enforced an oral settlement agreement reached during non-binding, confidential mediation even though the agreement was not reduced to writing immediately. Willingboro Mall Ltd. v. 240/242 Franklin Avenue Associates LLC In this case, the plaintiff and defendants were commercial real estate entities and persons involved in management of the.. read more →

There are so few reported cases in New Jersey involving claims of mediator malpractice that any cases involving such claims are important. In Jankowski v. Sandor, Docket No. A-0770-10T2 (App. Div., July 27, 2011), the Superior Court of New Jersey, Appellate Division, affirmed the dismissal of the mediator malpractice claims based upon choice of law.. read more →