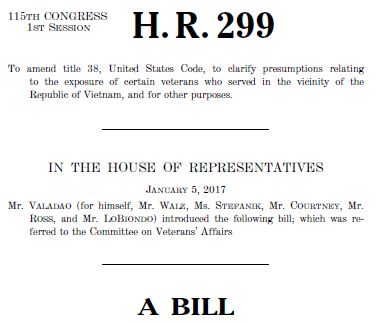 On May 8, 2018, the Veterans Affairs (VA) Committee of the U.S. House of Representatives passed H.R. 299, the Blue Water Navy Vietnam Veterans Act of 2017. The bill would restore benefits to thousands of Vietnam veterans; expand inclusive dates to those who served along the Korean demilitarized zone (DMZ); and, benefit children born with spina bifida due to a parent’s exposure while a veteran to Agent Orange-related herbicides in Thailand. The bill must still be approved by the full House and Senate before going to the president,

Once passed into law, H.R. 299 will restore VA benefits to some 100,000 Blue Water Navy veterans who had their disability eligibility terminated in 2002 after regulatory changes. It will also require the VA to contact those veterans who had filed claims that were later denied. Those veterans could be eligible for retroactive benefits.

The legislation marks a victory for other veterans and their families who suffer from conditions related to toxic exposures. Veterans exposed to Agent Orange while serving along the Korean DMZ will have an earlier start date which will include the time period when various defoliants were tested. The current start date of April 1, 1968 will be made retroactive for seven months, to Sept. 1, 1967. In addition, benefits will be expanded to include children born with spina bifida due to a parent’s exposure in Thailand. Coverage for this condition already exists for the children of Vietnam and Korean DMZ veterans.

The new law will also require the VA to report on research being conducted on a broad range of conditions possibly related to service in Southwest Asia, which is important for future legislative efforts to create a list of presumptive conditions for veterans seeking VA health care and benefits.

Assuming that the Full House and the Senate pass the bill, President Trump is expected to sign the bill into law before Memorial Day, 2018.