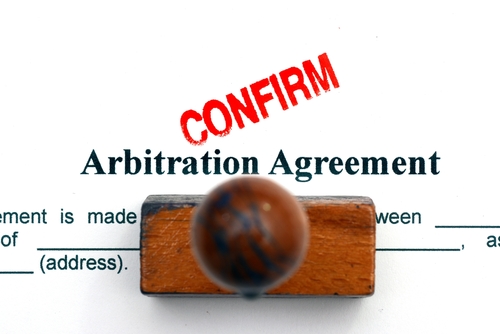 The decedent was admitted to the defendant facility, Regency Heritage Nursing and Rehabilitation, in 2013. On the admission date, her daughter accompanied her to the nursing home. The daughter alleged that she was separated from her mother and brought to a conference room, where she was presented with a stack of documents to sign. She claimed that a staff member turned the pages of the nursing home admission agreement, and pointed and instructed her where to sign. The agreement contained a two-paragraph arbitration clause, in which the resident/responsible party waived the right to a trial in favor of arbitration. The agreement also stated that a request for arbitration must be made in writing within one year of when the party initiating the arbitration knew or should have known about the claim. The daughter initialed the arbitration agreement paragraphs and signed the admission agreement as the resident’s responsible party.

After the decedent’s death in 2016, her estate filed a complaint against the nursing home in the Superior Court, Law Division. The nursing home filed an answer and later moved to dismiss the complaint and to compel arbitration.

The trial judge granted the nursing home’s motion to dismiss. The judge concluded that the daughter had the authority to sign the nursing home admission agreement as the responsible party; that the arbitration agreement was conspicuous in form, with terms that were clear and unambiguous; that the daughter was competent to read and understand it; and that it was not unconscionable:

[The daughter’s] statements in her unrebutted affidavit establish little more than her lack of scrutiny of the admission agreement and do not indicate any failure on the part of [defendant’s] representative in presenting the agreement for her to sign.

The trial judge also found that it was the plaintiff estate’s burden to file for arbitration (which, presumably, it had failed to do within the one year time limit set forth in the arbitration agreement).

The plaintiff estate appealed, and the dismissal was affirmed by the Superior Court, Appellate Division. The appeals court found that, “when a party enters into a signed, written contract, that party is presumed to understand and assent to its terms, unless fraudulent conduct is suspected.” Here, neither party alleged fraud. Consequently, the daughter’s signature formed a binding agreement. It found that the agreement was not unconscionable, and did not violate federal law.

The Appellate Division also concluded that “a common sense reading of the agreement supports plaintiff’s obligation to assert her claims in arbitration.”

A copy of In re Estate of Greenstein v. Regency Heritage Nursing and Rehab Center can be found here –