Nursing Home Sued Daughter Of Resident, Claiming She Was Responsible For Dad’s Bills. She Fought Back And Won. 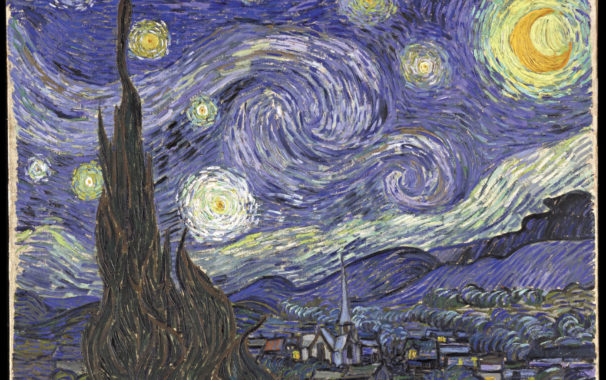 The following blog post is adapted from an article on NJ.com:

A few years ago, Tracey Mitchell’s dad needed to go into a nursing home.

Mitchell had no complaints about the care he received, but three months before he died, a surprise arrived via regular mail.

It was a lawsuit alleging Mitchell owed $49,000 to the nursing home. The lawsuit came out of nowhere, Mitchell said. (A screen shot of the Complaint is posted below) 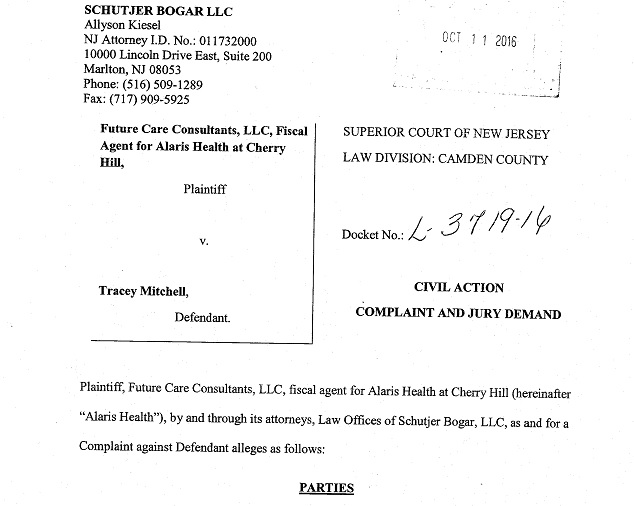 Mitchell said she was scared as well as perplexed. The nursing home never sent her a bill, she said, and just as important, she never expected to cover her father’s expenses.

Mitchell’s fight against the lawsuit highlights the complexities of paying for nursing home care. And it often comes down to the language in the contract.

The odyssey began when Robert Bowman was admitted in October 2015. He was too weak to sign any paperwork, Mitchell said, and she wasn’t asked to sign, either.

Mitchell said she told the nursing home her dad had meager assets. The staff instructed her to file for Medicaid on her father’s behalf, so she started the process.

About a week later, a social worker asked Mitchell to sign an admissions agreement for her dad, Mitchell said. She did, signing her name with the word “daughter” in parenthesis, documents show.

Bowman stayed at the facility for several months before he was approved for Medicaid on April 1, 2016. It would pay retroactively for three months, but that meant several months of his care were not covered.

Bowman didn’t personally have the assets to pay the difference, but, Mitchell said, no one at the nursing home indicated there was a problem.

Until the lawsuit arrived via regular mail.

“There were no discussions with Alaris about a bill. Alaris just filed the lawsuit against me,” Mitchell said. “I was shocked and scared when I tried to read the lawsuit and it claimed I owed Alaris over $49,000.”

The lawsuit alleged the paper Mitchell signed meant she was personally responsible for charges that were not covered by Bowman’s assets or Medicaid.

Inexplicably, neither Bowman nor his estate were named in the suit.

According to Mitchell’s attorney, Donald Browne of Bernetich, Hatzell & Pascu in Cherry Hill, the contract had a clause that was “illegal.”

But Mitchell can’t be held to that, Browne said, because both state and federal law specifically say nursing homes can’t require a third party to guarantee payment.

“The language of this statute is clear and concise,” Browne said. “It states plainly that personal liability of a third party is prohibited.”

Browne said that meant Future Care didn’t have a case.

Had Mitchell not signed, Browne said, the nursing home probably would have filed for Medicaid on Bowman’s behalf, noting Mitchell was never financially responsible for her dad.

Browne responded to the lawsuit, saying the law was clearly on Mitchell’s side. Browne also called the lawsuit frivolous, demanding Future Care drop the suit and saying Mitchell was countersuing for consumer fraud.

To the countersuit, Browne added SCO Silver Care Operations, which owned Alaris, and owner Avery Eisenreich, who is listed as SCO’s owner in a state license filing.

The suit alleged Future Care, SCO and Eisenriech, who public records show owns 12 nursing homes in the state, use the “illegal” wording in its contracts to collect from people who are not responsible for their loved ones’ nursing home bills.

“My theory is if they sue 10 people like this, they will find maybe one with an attorney who knows the law and nine will pay,” Browne said.

Future Care, SCO and Eisenreich are all represented by the same law firm, sb2 Inc. of Harrisburg, Pa., court documents show. The attorneys named in court documents didn’t respond to phone and email requests for comment.

We wanted to ask the attorneys more about the case and the 116 companies for which Eisenreich is listed on paperwork with New Jersey filings.

We also wanted to ask about other lawsuits found in public records, including two others against Alaris Health at Cherry Hill, six against SCO, 25 against Future Care and 15 against Eisenreich. Future Care, which has an “F” rating with the Better Business Bureau, also filed dozens of lawsuits in the past 18 months, and we wanted to ask about that, too.

But again, the attorneys didn’t respond.

The case against Mitchell went before a judge last month, and the judge dismissed it in Mitchell’s favor. The judge also awarded $34,000 in legal fees, which Browne said is uncommon in these cases.

Mitchell’s countersuit started Monday in Camden County Superior Court, alleging Future Care, SCO and Eisenreich violated the Consumer Fraud Act because of the “illegal” language in the contract and because the initial lawsuit against Mitchell was frivolous.

Browne asked for $49,000 – the maximum “ascertainable loss” based on the initial suit against Mitchell – plus treble damages and attorney’s fees, which are permitted under the Consumer Fraud Act.

Mitchell said it’s not really about the money, but about protecting unsuspecting consumers.

“I am hoping this case will send a message to nursing homes that they can’t file these illegal lawsuits against the children of their residents,” she said. “How many people just pay because they do not know it is illegal?”

Then on Tuesday, the day after jury selection, something changed.

“No comment,” said Browne. “The matter is resolved to our satisfaction.” He added he couldn’t comment any further.

To us, that sounds like a settlement in Mitchell’s favor.

Moving a family member to a nursing home is an emotional experience under the best of circumstances.

If you’re not careful, or if the facility you’re working with isn’t clear about the rules or uses contract language you don’t understand, you could get stuck with an unexpected bill.

Family members should never sign anything without reading and understanding it first. The fine print is essential.

First, look for the term “responsible party,” which is typically used in facility contracts.

Also look for the “guarantor,” which is used when a child or other individual personally guarantees to pay from his or her own personal funds.

In addition, the contract typically has language that makes it clear that the responsible party is required to file for Medicaid.

If the child in that case does not follow through on the Medicaid process after having agreed to do so – dropped the ball – and the application is denied because all information and documentation was not provided to the caseworker, the facility could look for payment from the child, arguing that the child did not take the steps necessary and diligently follow through with the application as he/she contractually agreed to.

Then there’s the Medicaid “look back” period, which is the five-year period during which Medicaid will examine the finances of the applicant. If the applicant disposed of money five years before needing Medicaid, he may be ineligible for the time period that could have been paid for by those funds.

Given all the complications, it’s worth seeking help before your loved one even needs Medicaid.

Working with an experienced elder law or estate planning attorney can help you navigate the process, especially if you’re trying to protect assets. Hiring help can save you thousands in the long run, and it will eliminate common mistakes which cause delays, denials and the tremendous backlog.

(As stated, this blog post was adapted from an article on NJ.com. The NJ.com article can be found here:   http://www.nj.com/business/index.ssf/2018/06/could_nursing_home_force_you_to_pay_for_dads_care.html)

First, let me acknowledge and congratulate legal counsel who won the case for Tracey Mitchell, Donald F. Browne, Jr., Esq., of the law firm of Bernetich, Hatzell & Pascu, LLC, located in Cherry Hill, NJ. Excellent job, Donald, and thank you for your efforts.

Second, I want to discuss how the Court disposed of the case. The Court did not rendered a written opinion in the Future Care Consultants, LLC v. Mitchell case. Rather, the reasons given by the Court for its decision were set forth orally on the record. However, the Court entered 2 orders disposing of the case attached here. The first order granted summary judgment, entered by the Court on February 16, 2018, entered judgment dismissing plaintiff”s 3rd party claims. The second order granted summary judgment on plaintiff’s remaining claims, entered on April 27, 2018, covered defendant’s alleged mismanagement of her father’s available funds. Thereafter, and importantly, on May 25, 2018, Hon. Steven J. Polansky, J.S.C., a Superior Court judge in Camden, NJ awarded $34,000 in attorney’s fees in favor of defendant Tracey Mitchell and against plaintiff Future Care Consultants, LLC. Finally, a trial on defendant’s consumer fraud claim is scheduled in June 2018.