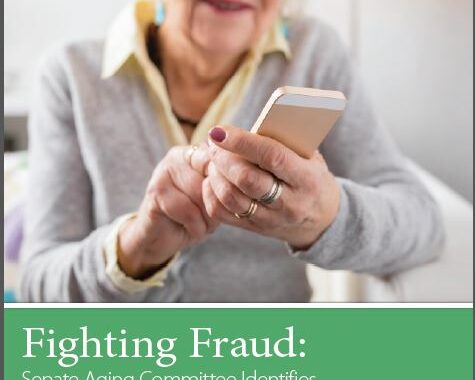 The U.S. Senate Special Committee on Aging has released the 2018 Fraud Book, listing the Top 10 Elder Scams Of 2018 based on reports to the Senate hotline.  The report is entitled “Fighting Fraud: Senate Aging Committee Identifies Top 10 Scams Targeting Our Nation’s Seniors.”

From January 1, 2017, through December 31, 2017, the Senate Aging Committee’s Fraud Hotline received a total of 1,463 complaints from residents all across the country. Calls pertaining to the top 10 scams featured in the Senate report accounted for more than 75% of the complaints.

Here is the executive summary for the report:

The top complaint, the focus of more than twice as many calls as any other scam, involves [IRS Impersonation Scams,] seniors who receive calls from fraudsters posing as agents of the Internal Revenue Service (IRS). These criminals falsely accuse seniors of owing back taxes and penalties in order to scam them. Due to the extremely high call volume and continued reports from constituents from across the country, the Aging Committee held a hearing on April 15, 2015, to investigate and raise awareness about the IRS imposter scam. Prior to a large law enforcement crackdown in October 2016, nearly three out of four calls to our Hotline involved the IRS impersonation scam. In the three months after the arrests, reports of the scam into the Committee’s hotline dropped by an incredible 94 percent. Though the numbers have since rebounded somewhat, they are still far below the levels we have seen in the past.

The second most common scam reported to the Hotline involved robocalls or unwanted telephone calls. On June 10, 2015, the Aging Committee held a hearing on the increase in these calls that are made despite the national Do-Not-Call Registry. The Committee examined how the rise of new technology has made it easier for scammers to contact and deceive consumers and has rendered the Do-Not-Call registry ineffective in many ways. On October 4, 2017, the Aging Committee held an additional hearing on robocalls, this time examining recent developments by both the private and public sectors to combat robocalls and protect seniors from fraud.

A new scam to make the top 10 list for 2017 involves [“Can You Hear Me?” Scams,] consumers receiving calls in which the caller would simply ask “Are you there?” or “Can you hear me?” in order to prompt the recipient to say “yes.” According to the Federal Trade Commission (FTC), these illegal robocalls are pre-recorded, and are designed to identify numbers that consumers are likely to answer, allowing scammers to better identify and connect with potential victims. The increased use of this tactic by scammers in robocalls last year demonstrates how sophisticated scammers are.

Grandparent scams, the focus of a July 16, 2014, Aging Committee hearing, were next on the list. In these scams, fraudsters call a senior pretending to be a family member, often a grandchild, and claim to be in urgent need or money to cover an emergency, medical care, or a legal problem.

Computer scams were sixth on the list and the subject of an October 21, 2015, Committee hearing. Although there are many variations of computer scams, fraudsters typically claim to represent a well-known technology company and attempt to convince victims to provide them with access to their computers. Scammers often demand that victims pay for bogus tech support services through a wire transfer, or, worse yet, obtain victims’ passwords and gain access to financial accounts.

Romance scams were seventh on the list. These calls are from scammers who typically create a fake online dating profile to attract victims. Once a scammer has gained a victim’s trust over weeks, months or even years – the scammer requests money to pay for an unexpected bill, an emergency, or another alleged expense or to come visit the victim – a trip that will never occur.

Elder financial abuse was eighth on the list and the topic of a February 4, 2015, Committee hearing. The calls focused on the illegal or improper use of an older adult’s funds, property, or assets. Chairman Susan M. Collins, former Ranking Member Claire McCaskill, and current Ranking Member Robert P. Casey Jr. have introduced the Senior$afe Act, which would allow trained financial services employees to report suspected cases of financial exploitation to the proper authorities without concern that they would be sued for doing so. The Committee also examined the financial abuse of guardians and other court appointed fiduciaries at a hearing in November 2016.

Identify theft was the ninth most reported consumer complaint to the Fraud Hotline in 2017. This wide-ranging category includes calls about actual theft of a wallet or mail, online impersonation, or other illegal efforts to obtain a person’s identifiable information. On October 7, 2015, the Aging Committee held a hearing titled “Ringing Off the Hook: Examining the Proliferation of Unwanted Calls”, to assess the federal government’s progress in complying with a new law requiring the removal of seniors’ Social Security numbers from their Medicare cards, which will help prevent identity theft. Medicare will start mailing the new cards in April 2018.

Government grant scams rounded out the top 10 scams to the Fraud Hotline last year. In these scams, thieves call victims and pretend to be from a fictitious “Government Grants Department.” The con artists then tell the victims that they must pay a fee before receiving the grant.